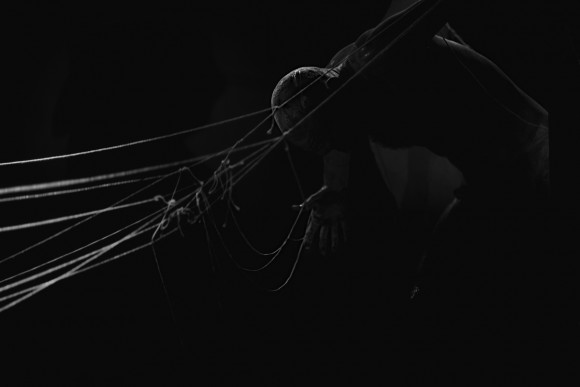 Follow invisible trajectories, deceiving false limits imposed by the obscure. Cross the shadows, denying any ambiguity from the beginning with what appears related to the subject matter of the dark. The necessary dematerialization of what remains of the language. The obscure has no need of textual structures that lead to a consolidation in fact non-existent in its own antecedents. There is no need to tell, there is no story, there is no possibility entities such as shadows can bend to the will, already defeated, to make them elements of an everyday noise, logorrhea useless and boring. The verbal languages ​​make use shadows to build a shared recognizability, but the word returns to nothing it was if intended as an interlocutor of that which has no voice. The shadows are primitive effusions of the beginning, constructions of the afterlife of the sense.It is not the story, about anything, is the ongoing training of the unknown, intuited and revealed in the silence.

There is something mysterious and not seen in the expression of Hijikata, by the action of Ohno. Butoh as reconnaissance and self-consciousness of liberating forms adverse to the imitation and renunciation of the sense. This was the original tension that for not a case interest me and led me to this meeting. Ankoku Butoh, the darkness of Mishima, its forbidden colors, my silence.

Vanquish the representation using it as an antidote to clear the road of meaning, beyond the sense. I saw then in the frequent temptation to quote of the various Butoh performers I've encountered so far, the possibility of break all ties with their code through their own action. I have in some manner appropriate to jump over, look what you can not say otherwise. Leaving in the shadows chisels of restless and angry, seeing dislodge the unheard.

My prohibited colors are mostly the escape of the masses shadowy, of movements of the obscure, from the intolerable dictatorship of the sense constructed, reconstructed and recognized by the language. Freedom from fiction and the pretenses. They are my flowers left on the forgotten fields of contemporary. The shadows are fluids that outpourings without gravity through the possible deformity of light. In disarticulation of each represented space, I seek the end of each metamorphism, any possible arrival, destination, conclusion. I do not care to reach something, I do not care to die trusting in the redemption of desire. What matters, what would be natural ambition, is impermanence. The irradiation of diachronic matter and intuition that implodes in the invisible, but he cut his own movement, continuous and irreversible, falling into infinity every moment more.

All rights reserved. No part of this website may be reproduced, distributed, or transmitted in any form or by any means, including printing, recording, or other electronic or mechanical methods, without the prior written permission.

For enquiries and licenses, please do not hesitate to contact me at:
me@giacomopor.com
or visit my profiles, available on the Contact page.